The GCPS is a registered society dedicated to preserving the history, site, and memory of Granite Creek, BC. Membership is open to all.

Phil Collishaw donated gold scales, a tin box for the scales, set of concentric weights, and a gold poke which belonged to his grandfather John Edward Collishaw. These items are now at the Princeton Museum and Archives. 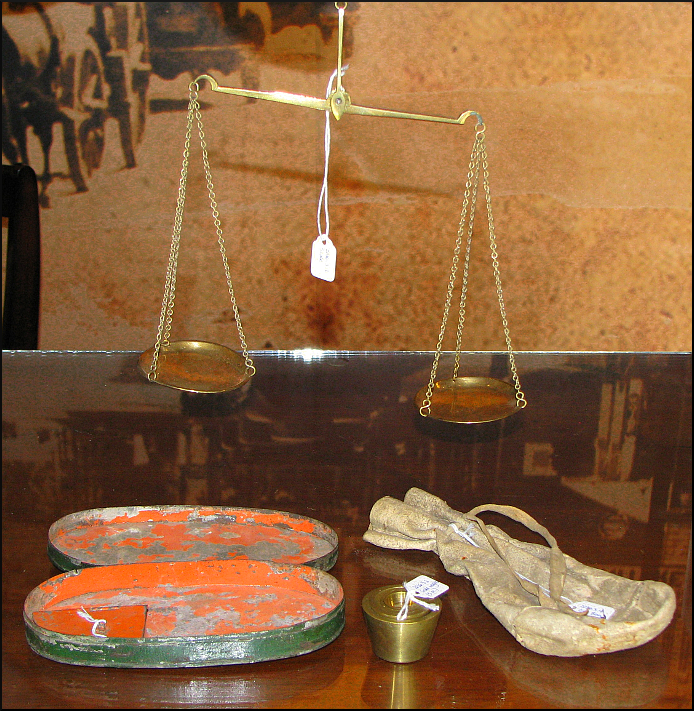 Here is some information about J.E.Collinshaw listed on WikiTree:

Jack was educated at Manchester University, Oxford, where it seems that several family members attended. He studied music, and was very talented. After leaving school, he was urged to help with the family inn, and even inherited the property upon his father's death. Instead, he decided to spend his inheritance on travel. His first stop was western Australia. Jack then came to America (San Francisco) to seek his fortune in the gold fields of California in the 1880's. When that search proved fruitless, he moved up the Pacific coast to Nanaimo where he became a coal miner. Discouraged by the poor wages ($500/year in 1901), he headed further up the coast to the Yukon, prospecting in the summers, and back to the coal mines in the winters. In the summer of 1909 he abandoned his family, and was heard occasionally thereafter, the last occasion being in 1923. His family assumed he had returned to Australia to search for gold there, but no proof or record has ever been found of that. Another family theory was that he may have gone to Montana. No record of that has been located either. What is known for sure is that in 1912 Jack was prospecting in the Yukon, and was credited with discovering gold on 30 Apr 1912 on Cabin Creek, a tributary of Nansen Creek, and on Pony Creek, a tributary of Rack Creek. Placer mining applications were registered to him at Carmacks on 08 Mar 1912, 26 Mar 1912, 18 Jun 1912, 19 Oct 1912, and 04 Dec 1912. No further applications were registered in the Yukon, and he does not appear on the 1917 Yukon voters list.

Note from Diane Sterne: It is probably safe to assume he arrived at Granite between 1885 and 1890 (in 1891 I found him in the Nanaimo Census). Many at Granite in the early years were from the California Gold Fields. Thomas Murphy explained in his Memoirs that it was almost impossible to get a claim in the area so you either had to buy a claim or work for someone else. I couldn't find any reference to him, it is possible he worked for another prospector.


If you have an interest in the history of the Tulameen valley, mining district, and Granite Creek
please click this line to become a member of the society